The cryptocurrency market has started the week in a negative manner, with prices of most coins down by more than 4% in the last 24 hours.

Bitcoin, the world’s leading cryptocurrency by market cap, has been underperforming over the last few hours. The price of Bitcoin is down by more than 3% in the last 24 hours and is now trading at around $16,071 per coin.

The poor performance could see Bitcoin drop into the $15k region over the next few hours. There is no major catalyst behind Bitcoin’s poor performance as it coincides with that of the broader crypto market.

The total crypto market cap has dropped below the $800 billion mark for the first time in months, after losing 4% of its value in the last 24 hours.

Ether, the second-largest cryptocurrency by market cap, has lost 7% of its value today. The price of Ethereum is now trading at around $1,110 per coin.

The BTC/USD 4-hour chart is bearish as Bitcoin has been underperforming over the last 24 hours. The technical indicators show that the bears are in control.

The MACD line has dropped into the negative zone, due to Bitcoin losing 3% of its value in the last 24 hours. The 14-day relative strength index of 32 also shows that Bitcoin could enter the oversold region soon if the bearish trend continues.

If the bears remain in charge, Bitcoin could fall below the first major support level at $15,813 before the end of the day. In the event of an extended bearish performance, BTC could dip toward the $15,500 support level.

However, the bulls could make a comeback and push Bitcoin toward the $16,535 resistance level over the next few hours. Unless there is a massive bullish run, BTC will find it hard to move past the $17k resistance level in the near term.

Where to buy Bitcoin now

eToro offers a wide range of cryptos, such as Bitcoin, XRP and others, alongside crypto/fiat and crypto/crypto pairs. eToro users can connect with, learn from, and copy or get copied by other users.

Bitstamp is a fully regulated company which offers users an intuitive interface, a high degree of security for your digital assets, excellent customer support and multiple withdrawal methods.

The post Bitcoin could slip below $16k soon as market losses nearly $40 billion over the weekend appeared first on CoinJournal. 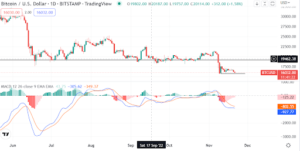 Previous post Bitcoin’s choppy pattern continues. Here is why the next breakout could be catastrophic
Next post Cardano’s algorithmic stablecoin to go live on mainnet in January 2023

Crypto exchange Binance has reentered the Japanese market after acquiring a 100% stake in Sakura Exchange BitCoin (SEBC), a regulated...

Gemini and Nexo have joined crypto exchanges Coinbase, Binance, and Crypto.com in getting regulatory approval from Italy’s Organismo Agenti e...

BTC has been in a consolidation phase in the past few days. Bitcoin’s fear and greed index has moved to...

Since 2012, I’ve been arguing that freedom is priceless. After giving up a healthy income and my career for more...